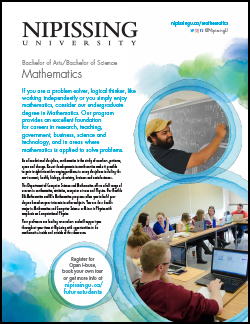 Welcome to Mathematics at Nipissing

We offer the following degree options:

At Nipissing, we combine a strong foundation of academic theory with an emphasis on research. That means you’ll not only learn through lectures, you’ll also spend a significant amount of your upper years ​completing your own research work, under the close supervision of a professor, which is an amazing opportunity for undergraduate students.

Math opens up all kinds of career opportunities, from engineering to business to teaching, and more. You can even learn how to design computer games, if you opt for the Certificate in Game Design and Development.​​​​​​

Bachelor of Arts (BA) in Mathematics

Bachelor of Science (BSc) in Mathematics

The Pure Mathematics Stream will appeal to those who intend to continue on to graduate studies in Mathematics or a closely related field. The stream provides a solid foundation for careers based within teaching, business, science and technology-related sectors, not to mention roles as statistician or market researcher.

For those of you who seek employment in a field where mathematical tools and methods are of major importance, you will excel in the Applied Mathematics Stream. Students who take this stream are well positioned to pursue graduate studies. In addition, many find fulfilling careers within the engineering, business, management and government sectors.

The General stream combines the most fundamental courses in the Mathematics curriculum for those who do not have a strong preference toward or a desire to specialize in any of the other streams. The General Stream will keep your options open for future study and/or employment as a mathematician.

Certificate in Game Design and Development

Love video games? The Certificate in Game Design and Development, teaches you the skills you need to design game-related computer applications, and other similar types of software. You will learn skills in advanced programming, software engineering, design, and algorithm development. Some of your courses will cover the introduction to game design and development, 3D computer graphics, animation software, and artificial intelligence. This certificate will prepare you for a career in the fast-growing gaming industry.

END_OF_DOCUMENT_TOKEN_TO_BE_REPLACED

Certificates available to all Nipissing students

Certificate in Health Studies and Gerontology

Certificate in Conflict Resolution and Negotiation

You can participate in math competitions like the Kangaroo Contest or in student-organized events like Pi Day. If you’re interested in teaching, you can get involved in running math circles at local elementary schools. You can also tutor your fellow students—or get some help yourself, if you need it—at the Math Drop-In Centre.

The Nipissing University Mathematics Education, Research, and Information Centre (NUMERIC) represents a group of educators from the Faculty of Arts and Science (Mathematics/Physics), the Faculty of Education (Mathematics), and the local community who share an interest in promoting the learning and appreciation of mathematics through a variety of sponsored events.

We are pleased to announce that Nipissing University is an Afilliate Member of The Fields Institute for Research in Mathematical Sciences. The Fields Institute, while focusing much of its attention on mathematics as a discipline, also features the Math Ed Forum which offers regular public meetings at Fields, as well as sponsoring a variety of mathematics education events and projects.

The general focus of the NCPL is to develop, implement and apply advanced numerical algorithms and computational methodologies for the solution of problems arising from nanophotonics for nanotechnology and nanomedicine applications. The NCPL is an advanced physics lab intended for junior and senior level students in science and engineering. We are primarily engaged with the design of algorithms for nanoscale and multiphysics problems described by 3D fully coupled partial differential equations. Our lab is equipped with high performance computational server and several workstations with multiple operating system environments, and running a number of computational and simulation programs including COMSOL Multiphysics, MATLAB, Maple, Mathematica, Numerical Recipes, the Electronic Workbench, and others.

Topology is a study of very far reaching generalization of geometric properties of objects, invariant under special types of deformations. Topological methods are widely used in functional analysis, differential equations, algebra, and other areas of mathematic. The following topics are of particular interest for the members of the department: dimension theory (classical, cohomological, extension, and asymptotic dimensions; infinite-dimensional spaces), selections, continuum theory, dynamical systems.

At the Math Drop-In Centre, fellow students help each other master the material they’re learning. You can volunteer at the centre, too!​​​

Scholarships, awards, and bursaries for students in the Mathematics programs​​​

The NU Math Club is a place for students of all years to meet, talk and form friendships. Students will be able to meet more people in their classes and upper year students and get advice and homework help from their peers. The club's goal is to strengthen the mathematics community on campus.

In Mathematics, the following areas of research are especially active:

Topology is the study of far reaching generalizations of geometric properties of objects, invariant under special types of deformations. Topological methods are widely used in functional analysis, differential equations, algebra, and other areas of mathematics. The following topics are of particular interest for the members of the department: dimension theory (classical, cohomological, extension, and asymptotic dimensions; infinite-dimensional spaces), selections, continuum theory, and dynamical systems. More information about research in Topology can be found at Topology Research Group website.

Computational Geometry is focused on algorithms and data structures that deal with geometric problems, and their implementations. Optimal triangulations, reconstruction of polygons based on visibility data, and computing kernels of orthogonal polygons are among the recent topics.

Algorithmic Graph Theory is focused on study of the combinatorial properties of certain graph classes and design of algorithms for efficient solution of generally hard computational problems on these graph classes. Hamiltonicity, longest paths, vertex separation, structural indices and colourability are among the recent topics.

Computational Physics is focused on highly interdisciplinary research in the areas of nanotechnology, nanophotonics, biophotonics and nanomedicine. Our research focuses on developing fundamental theoretical approaches and computational methods for solving problems and building software tools within these fields.

I spent four years at Nipissing as a student of the department of computer science and mathematics. In this time, my peers and I formed a close-knit group, complete with our own home in room A223 and great set of faculty to support us in our educational endeavours. We shared our frustrations and our successes. We laughed with and learned from our professors. Together, we grew to love the language of mathematics.

Nipissing’s entrance scholarships are wonderful, and the campus is beautiful, but its community is its crown jewel.

With the broad skills and ra​nge of experiences you’ll get in mathematics, your future is wide open. You can choose from careers as diverse as business analyst, technical writer, nuclear engineer, computer consultant, financial advisor, and economist, to name only a few!

Many students decide to pass on their love of math by becoming teachers and professors. Some go onto graduate studies in Masters and Doctorate programs, or professional schools to gain even more skills.

Master of Science in Mathematics

The Master of Science in Mathematics program consists of course work plus a Major Research Paper, and is offered as both a one-year full-time program as well as on a part-time basis. Our program trains students for future work in research, industry, business, or government, and provides a strong background in foundational areas of mathematics.
END_OF_DOCUMENT_TOKEN_TO_BE_REPLACED