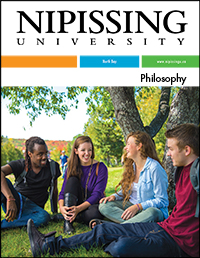 Welcome to Philosophy at Nipissing

Thinking about a Major? Why not Major in Thinking? Rather than being concerned with a particular set of questions or a particular period of time, philosophy concerns itself with the nature of inquiry, thought, and argument itself, asking how each of these operates in the various areas of human life, from ethics and politics to the study of nature and reality. This means that philosophy students take up the truly big questions: What is the best life? Why should we be moral? How is knowledge possible? Is the world really as it appears to us? How does the mind work? At the same time, the skills students develop in pursuit of a degree in philosophy – careful reading, charitable interpretation and discussion, and rigorous argumentation – have proven themselves to be useful in innumerable fields within and beyond the university.

The Philosophy Program at Nipissing is small and student-focused: with an average of 35 full-time majors, students get to know and work closely with both their professors and their peers. The department is particularly committed to introducing students to the history of philosophy, from the ancient period to the present. The program is designed to work well either as a stand-alone degree or as a combined degree with other programs, and there are numerous philosophy courses offered each year that do not have prerequisites and that are popular electives for students in other programs.​

Save the Philosophy brochure PDF
Book a Campus Tour

Bachelor of Arts (BA) in Philosophy

Some especially popular courses include:

Students are introduced to the main concerns in the discipline of Philosophy within the Western tradition. Beginning with the ancient Greeks and ending with the 20th century, students explore some of the most significant issues that have engaged philosophers during each of the main periods of the long and complicated history of Western Philosophy.

PHIL 1117: Values and the Human Condition

Students are introduced to some of the most important themes in the theory of value. While the specific topics and texts will vary each year, students can expect to critically explore fundamental questions about what it means to be a human being, the significance of human diversity, and the role of values in human life.

The notions of definition, fallacy, propaganda and persuasion are discussed and related to techniques used by governments and advertising agencies in the pursuit of their goals. The formal properties of deductive reasoning - what can and cannot be done with the rules of logic - are outlined and applied to arguments in ordinary language.

Students will examine bio-ethical issues emerging in therapy, research, public policy, and law. The course will include a brief discussion of perspectives in moral philosophy; however, the bulk of the course will deal with specific debates within bio-ethics. Topics to be discussed may include the role of well-being and care in moral argumentation; the moral significance of biological life; patient autonomy and questions of competence and consent; cultural diversity and medical ethics; end-of-life issues, such as euthanasia and the definition of death; abortion; genetic manipulation, screening, and eugenics; the ethics of medical experimentation and research; the question of a right to healthcare; and the application of principles of distributive justice to scarce medical resources. This course may be credited towards Religions and Cultures.

Students examine important historical positions as well as recent developments in moral philosophy as they are applied to questions of environmental practice and the moral status of the environment. Topics to be discussed may include: the moral status of nonhuman nature; duties to respond to climate change, including issues of intergenerational justice and collective responsibility, as well as consideration of the social construction of the natural; economics and sustainability; deep ecology; and environmental activism and eco-terrorism.

This course will introduce existentialist philosophy as a reaction to enlightenment reason and nineteenth century idealism. The meaning of individual existence, nihilism, creation, freedom and intersubjectivity will be explored through philosophical and literary texts that may include the work of Schopenhauer, Nietzsche, Kierkegaard, Dostoevsky, Kafka, Camus, Sartre and de Beauvoir.

This course explores the three major Asian philosophical traditions: Confucianism, Taoism and Zen. Although these three traditions are dealt with separately, some time is spent on considering how they intersect in matters of epistemology, metaphysics and socio-political thought. This course may be credited towards Religions and Cultures.

Certificates available to all Nipissing students

Certificate in Health Studies and Gerontology

Get involved beyond the classroom, the Nipissing University Philosophy Society is a monthly gathering where you can hang out with your peers and discuss ideas.

Nipissing's campus is located on a stunning 291 hectares of Canadian Shield forest. With our focus on student-centred living and learning, you will feel a sense of community the moment you step on campus.

The Harris Learning Library was completed in 2011 and provides 56,000 square feet of study space with natural light and a modern award-winning design. The new library features expanded print collections, a learning commons, an adaptive technology area, and collaborative work spaces.

Achieve your goals on time and on budget. We’ll help you fund your education through scholarships, awards, bursaries, government assistance, and work study programs. Learn More...​

If you want to experience a year or a semester at one of our partner schools across the globe, we have support services and programs to help you get there. If you want to assist International students with adjusting to life in Canada, we’ll connect you. Check out your options...

Our top-rated residences will make you feel right at home. You will make fast friends with your residence community. Our student leaders, Residence Dons, and award winning residence staff give tutorials on everything from the basics of laundry and cooking to making connections within the community. Learn More...

“I hear and I forget, I see and I remember, I do and I understand.” Confucius

Experiential learning is an effective medium that enhances and reinforces classroom learning. In addition, skills and competencies in the areas of communication, teamwork, analysis, work ethic, and problem solving are all learning outcomes that assist with finding the right career path for you.

Students enrolled in the Nipissing University Promise program will be invited to return to Nipissing, tuition free, for up to 30 additional credits if six months after completing their four-year undergraduate degree program with a 70 percent average and all required elements of the program, they have not secured career-related employment.

If you are eager to get involved beyond the classroom, take part in the annual Undergraduate Research Conference, which gives you the opportunity to present your work to peers, professors, and family members. You may also have opportunity to work as a Research Assistant to help a professor conduct research and gain valuable experience at the same time.

Involvement and experiential learning lead to more personal and academic success by connecting classroom learning to real world experience. Volunteer on your campus and within the community and be officially recognized for all that you do. The Record of Student Development (RSD) documents that you have completed a series of involvement outcomes that all employers are looking for. Achieving all the competencies associated with the RSD will help you communicate the depth of your experiences as you apply to career opportunities.

Employers are looking for people with the following proven abilities:

To register and see the full list of RSD competencies visit www.nipissingu.ca/rsd

Exercise and healthy competition always help to clear the mind.

Club sports are available to all Nipissing students and are both recreational and competitive.

Go Lakers! Our varsity athletes always bring their “A” game. Get your friends together and come out to cheer on your favourite teams.

Whether you are a gym enthusiast or a weekend warrior, Nipissing has just what you need.

​Nipissing Philosophy graduates go on to very successful careers. So far, all of our students who have applied to Masters programs have been accepted—often with scholarships! Philosophy is excellent preparation for law school, and our grads typically score very well on the Law School Admission Test (LSAT), thanks to the skills they develop during the program.

Philosophy students become particularly good at thinking outside the box. Because of this, many of our students have gone on to successful careers in business, where original thinking is valued. But your skills will transfer well to many other kinds of careers, including environmentalist, journalist, researcher, activist, and much more.