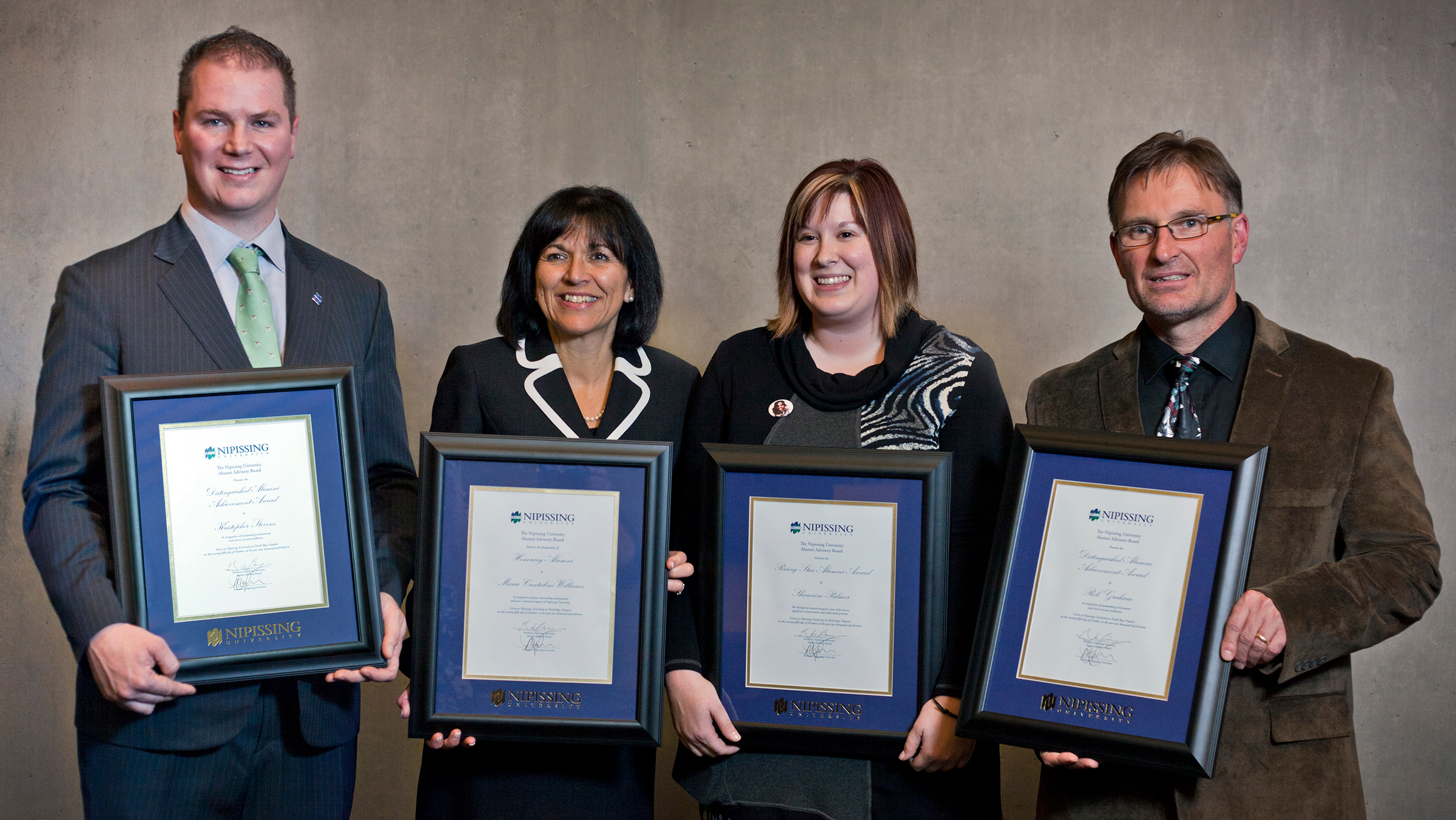 Alumni Board Members are ineligible to receive an award during their time of service. However, nominations may still be submitted and will be held for future consideration. Nominators are not allowed to be related to the nominee.

Alumnus may be nominated in one of five categories (Click each award name for details):

The awards are presented during our annual alumni awards event (date to be announced). Awards are not necessarily presented in all categories each year.​​​

Each award consists of:

To nominate an individual, please click the button below. Nominations close July 1, 2021.

Presented to a recent graduate of Nipissing University who has demonstrated significant achievements on a professional, community and/or volunteer basis or has displayed promise of significant future accomplishments. Restricted to alumni up to and including their fifth year of graduation.

*Please note that the Rising Star Alumni Award was previously known as the Alumni Achievement Award.

Past Recipients of the Rising Star and Alumni Achievement Award:

*Please note that this award was previously known as the Distinguished Alumni Award.

Past Recipients of the Distinguished Alumni Award:

Presented to a graduate whose dedication and leadership has influenced significant change and prosperity within their community. The recipient may be an alumnus of one of the following institutions: North Bay Normal School, Teacher’s College, Nipissing University College or Nipissing University.

The award is named after Dr. James Jamieson, who was made an honorary member of the Nipissing University Alumni Association in the early 1980s. He was one of the founding members of the Alumni Association and served as its first President from 1973 - 1975. He served as a member of the Board of Governors from 1975 –1986. In 1981, he, along with Dr. George Zytaruk, was instrumental in the setting up of the Office of Alumni Affairs.

The award will be presented during a yearly event (the date will be determined each year).

Past Recipients of the Dr. James Jamieson Influential Alumni Award:

*The Dr. James Jamieson Influential Alumni Award was introduced in 2011 and was presented to a multitude of exceptional alumni.

Past recipients of the Honorary Alumni Award:

Past recipients of the Honorary Alumni Award:

Awarded to an alumnus or champion of Nipissing University who is making significant contributions to improve their community through their generosity, dedication, commitment and service. The ideal candidate is passionate about an important social cause, freely gives their time, exemplifies great leadership qualities and has demonstrated an unwavering commitment to improving the social challenge related to his or her cause. This can include attempting to break down biases, change perceptions and alleviate issues impeding progress, working toward conquering a problem and/or responding to a need in a tangible way. An individual that graduated from one of the following institutions is considered an alumnus: North Bay Normal School, Teacher’s College, Nipissing University College or Nipissing University.

Past recipients of the Philanthropy Alumni Award: