Nipissing University’s mace is a complex mixture of artistry and power. Its presence depicts the authority vested in the university to grant degrees, yet its design signifies more than the right to certify students as knowledgeable; it incorporates all the effort, history and tradition that surround both the site of and the vision for the university.

Designed after Nipissing received its degree-granting charter on December 10, 1992, the mace masterfully pulls together the many symbolic elements important to its identity: the university’s crest, the Athenian owl pictured on the crest, the Nipissing University logo, Nipissing’s motto “Integritas” and the traditions of the Ojibwa people who have been keepers of the land on which the university stands.

The Nipissing University mace is an expression of growth and transformation within a context of harmony and equanimity with the world in which we dwell: specifically the Nipissing landscape. From the wisdom of the Anishinabek people, the mace draws the symbolism of the four orders of creation – mineral, plant, animal and human (and the gifts of the four winds):

As well, in keeping with Native tradition, the mace joins mother earth and father sky as it journeys symbolically from the fragment of granite at its base, through the trees to the golden sphere of the sun and the owl of the air.

Like the institution it represents, the mace is not static; it expresses growth, movement and perpetuity. Time is asserted through the four seasons and the transformation of the oak and maple from buds, to leaves, to fruit. The movement of the eagle feathers, the beads of the “medicine wheel” and the owl poised with an ambiguous relationship to flight add to the dynamics. 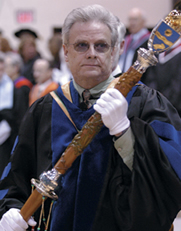 The coat of arms has a long history at Nipissing University and is symbolic of its tradition. There are three elements in the Nipissing crest: the sun, water, and the owl. The sun, our source of light, is symbolic of the illumination of learning. The water recalls the University's connection with Lake Nipissing, the origin of the institutions name. Like the sun, water sustains life and represents the abundant gifts of nature with which humans must live in harmony. The Athenian owl symbolizes wisdom, knowledge and antiquity. By facing front, it represents seeing the world as it is, which is the task and purpose of the University. The motto, Integritas, is Latin for the spirit of integrity, the desirable mode of human conduct and intellectual inquiry.