An all-gender washroom is a washroom that is not labelled male or female, but rather is available to anyone, no matter what their gender identity or biological sex.

Why would someone use an All-Gender washroom?

All-gender washrooms provide a safe washroom space for trans and non-binary people, as well as those whose gender expression may not appear to match their gender identity. For these people, using a binary gendered washroom can cause stress and be physically dangerous, which often results in them not using public restrooms at all.

Additionally, all-gender washrooms can be helpful to a wide variety of other people, such as: (1) parents or caregivers with small children of a different gender identity, (2) people who have a caregiver or personal attendant with a different gender identity from them, and (3) people who need privacy for a variety of reasons, including but not limited to: those who experience anxiety, are breast-feeding, and people who need a place to administer medications.

What does it mean to be trans? Is that different from being non-binary?

Trans or transgender is an umbrella term referring to people with diverse gender identities and expressions that differ from stereotypical gender norms. It includes but is not limited to people who identify as transgender, trans woman, trans man, transsexual, cross-dresser, gender non-conforming, gender variant, genderqueer, and non-binary.

Wait, how is gender different from gender expression?

Gender, or gender identity, is each person’s internal and individual experience of gender. It is their sense of being a woman, a man, both, neither, or anywhere along the gender spectrum. A person’s gender identity may be the same as or different from their birth-assigned sex.

Gender expression is how a person publicly presents their gender. This can include behaviour and outward appearance such as dress, hair, makeup, body language, and voice. A person’s chosen name and pronoun are also common ways of expressing gender.

While someone’s gender expression can match their gender identity, sometimes it does not. This can be a problem in gendered washrooms when people assume someone’s gender identity is the same as their gender expression. For example, someone who identifies as female may prefer to dress in a masculine or androgynous (not clearly male or female) style. This person may then be subject to verbal or physical abuse in a gendered washroom by people in the washroom who feel they do not ‘belong’ there. When in a gendered washroom it is important to trust that anyone who is using that washroom is supposed to be there, even though they may not look like they belong.

Why do we need signs beside the male and female washrooms?

All-gender washrooms are not always readily available, so including inclusive signage beside binary washrooms can help decrease the risk of physical or verbal harassment or assault occurring these spaces. These signs also help decrease fear and anxiety for trans and non-binary people, and allow them to feel comfortable in the washroom of their choice. Inclusive signage encourages respect for those with a different gender identity or expression, and communicates that discrimination towards trans and non-binary people is not acceptable.

Where are the all-gender washrooms on campus?

There are currently all-gender washrooms available in all academic spaces on campus:

Nipissing University is committed to increasing the number of all-gender washrooms on campus. 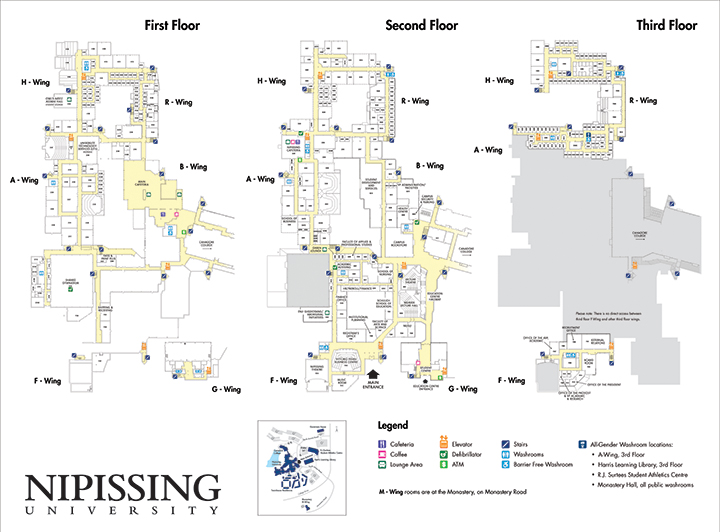 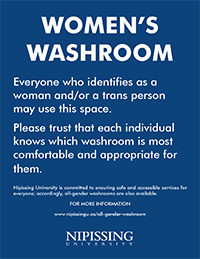 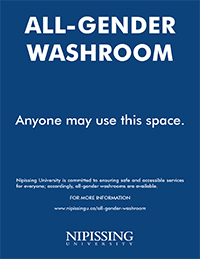 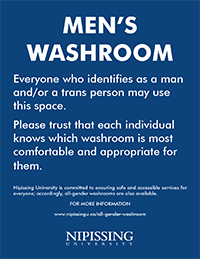